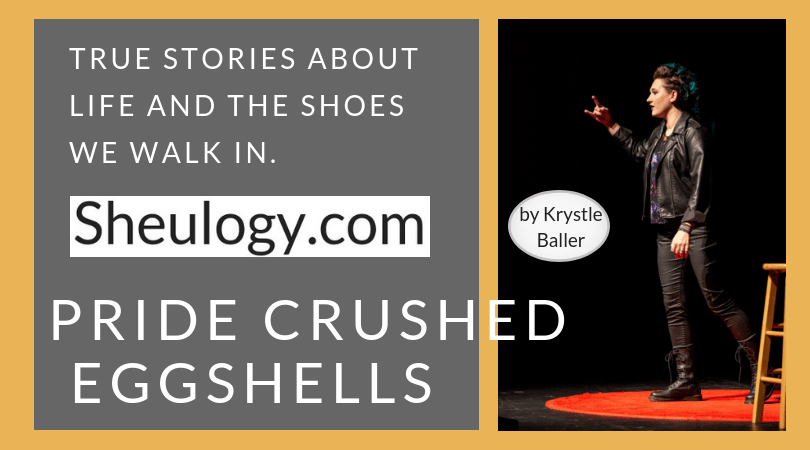 In August 2018, I ordered a pair of Doc Martens. I’d been drooling over them for years but could never justify the expense. Armor for my TEDx Talk was the final push to splurge.

One year later, on my 34th birthday, the boots broke. I’ve been reflecting on where they have taken me over the course of the year: divorce, healing from rape, and coming out.

When I had told my now former spouse about the boots I bought, he was pissed. My excitement of opening up the package was met with disgust. This was a pattern for us. My excitement, joy, and elation was often met with what felt like a gut punch. There was extreme turmoil at home.

When I found out that I had been selected as a TEDx finalist, I was thrilled, terrified, and proud. It was something I wanted for years and never thought would happen as quickly as it did.

My husband hated the idea of me doing this. “Just one more thing you have to do,” he’d say. He never heard my speech. Never asked, and didn’t come.

Meanwhile, at work, I paced in my Doc Martens working my speech out, unaware that I was simultaneously healing myself.

My boots walked me to my TEDx coaching session where, for the first time ever, I told my story of being repeatedly raped as a teenager. I physically shook and my voice wouldn’t come out solid. I cried and left feeling defeated, wishing for a safe place to talk about it when I got home.

Two months later, my boots walked me onto the TEDx stage where I f***ing slayed, delivering my talk, “Women Turn Up The Volume.”

My boots were on while I packed my life up into boxes and left the home I had lived in for 10 years. I didn’t know where I would end up or how I would manage to support my family while also following my purpose. After spending 100% of every day with my daughter since her birth, questions loomed about when I was going to be able to see her day to day.

My boots absorbed tears and raindrops as I moved my life and business.

My boots walked in and out of my lawyer’s office as I figured out my rights and stood my ground.

My boots supported me while my loving group of friends gave me reassurance and hugs.

My boots led me to a beautiful new life where I no longer walk on eggshells.

My boots were on when someone confided in me that they too were sexually assaulted, realizing I was finally healed enough to help them.

My boots rested on my porch while I sat and stared at the trees and the moon and realized I could never be in a relationship with a man again.

My boots pressed on the gas pedal when I told my mom this news and daily chats suddenly became months of silence.

My boots were also on when I first saw Elizabeth and, magnetically pulled to her, time seemed to stop.

My boots walked me into our healthy loving relationship. She is a wise, kind, talented artist who nourishes my mind, body and spirit. With her, I continuously feel inspired and supported in a relationship built on mutual respect and a serendipitous magic unlike I’ve ever experienced with a lover.

My boots walked me into Girls Rock Camp where I teach girls and gender diverse youth that they are more powerful than they could ever imagine. They’ve said I am their hero; that my Talk inspired and motivated them to play music, to speak up, and to be kind.

Just before the most recent Girls Rock Camp concert, the zipper on my boots broke. Elizabeth lovingly helped me rig them up. As music director, my boots and I shared our last walk: on to the McGlohan Stage where the kids did great, performing an original song they wrote and performed in five days time. The sounds and energy in the room was incredible.

Retiring my old broken boots, I have ordered a new pair. Looking forward to the journey ahead, I trust the Universe, I trust myself, I know I am worthy.