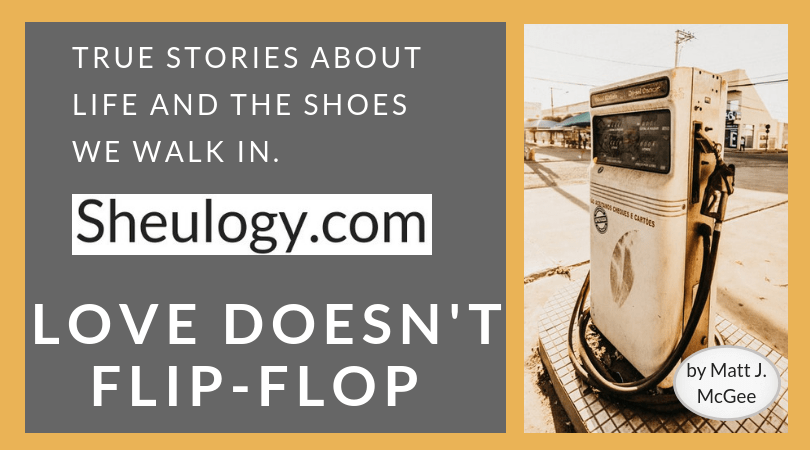 Shoe prejudice is real. For me, it was flip-flops. I’d say to myself, “Now, there’s someone who doesn’t deserve to be noticed, spoken to, or even considered a breathing individual.” The judgment went deep. When I saw someone wearing those things, the gears inside my head came to a screeching halt and I’d discount the person.  Yeah, that’s prejudice.

How she felt about white basketball shoes is how I felt about flip-flops – absolute minimum effort. If someone were to wear them to a job interview, for example, in my mind, it’d be a sure sign that they are going to work as little as possible.

Josh was a hulk of a guy, ugly by all standards. Board shorts, always in a black t-shirt. I think he only wore two t-shirts a week, stretching each one’s wear out for three or more days – absolute minimum effort.

Josh had fists like small hams and a complexion to match. Sometimes he’d whip off his shirt, usually ten beers into the evening, revealing the swastika tattooed on his pink shoulder. He was the king of mad-dogging, a fierce intimidator.

It was understood that it wasn’t just Josh you needed to be afraid of. It was the people Josh was connected to. The tattoo said that for him.

On this night, he was particularly out of control, pushing bar staff around, the bartender, anyone who dared breathe in the place.  He’d go up to women and lean into them, breathing a whole day’s worth of booze, and then staring down their boyfriends.  He essentially terrorized everyone there.

At some point Josh announced he was out of smokes and was going to walk over to the gas station to get more.  You could feel the room breath a sigh of relief, everyone was eager to pay their check and scoot out the door.

That’s when we heard SCREECH!!!  BAM!!!! And then another screech as a set of tires raced away.

We ran outside to discover that Josh had been hit by a drunk driver, someone who was on their way to the bar. The driver sped away, but regulars recognized the car.

We called 911. Cops arrested the driver a couple miles away and an ambulance rushed Josh to the hospital. Massive internal injuries, the paramedic said.

After the ambulance and cops left, I noticed one of Josh’s flip-flops by my car. Don’t ask me why I did this, because I don’t know. I had this Cinderella moment where I felt the need to reunite Josh with his shoe. For reasons I can’t explain, I jumped in the car on a mission to return it.

I walked into the ER, and rather than just leave the shoe with the nurse on duty or security or whoever, the guy on duty asked, “are you a friend?” and I instinctively said “yeah”. “Follow me,” he said, and led me to the ICU.

There was Josh, wrapped up, head to toe, knocked out cold.  Monitors were beeping and people were bustling in and out. And there beside his bed was an old man, Josh’s father, holding his son’s hand, in tears, breaking down.

I set the flip-flop on the nearby table and backed out of the room.

Riding back to the bar, I realized what I’d seen. Someone can be a complete jerk, a real piece of work. But no matter how we feel about them, or how much we discount them, there is someone out there who loves them.

Josh’s dad loved him and was by his side. We all deserve to have someone who loves us unconditionally, no matter what we’ve done, how we’ve lived, or what we wear.