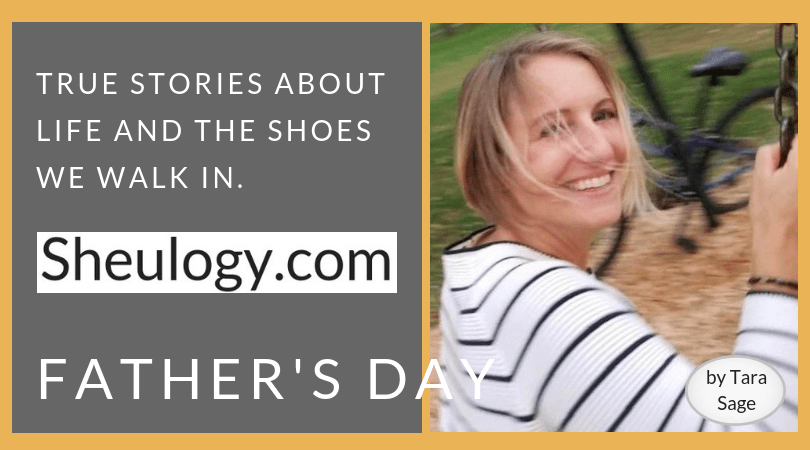 Father’s Day has long been a tough one for me.

For many years I didn’t acknowledge the holiday at all. These past few year though, I’ve made a habit of sending three special Father’s Day cards: one to my step-father, one to my uncle, and one to my sister’s wife (same-sex parents should each get a day, I think.)

My relationship with my father has been deeply complex, heart-wrenchingly difficult at times, and in many ways, truly profound.

He was a man of many contradictions. In his own backward way, he became one of my greatest teachers.

When I was a kid, something he often said to me was, “Do as I say, not as I do.” He’d also occasionally advise: “Do unto others before they do unto you.”  He thought that was funny.

In many ways, his example was not one to model or strive for. While it may sound like I’m criticizing him, I’m not. Based on what little I know about his growing up years, I’ve come to understand why he would subscribe to such philosophies. Everyone has a story.

My dad grew up on the lower-east side of Manhattan. As a girl, I remember him telling me about how he and his friends, after a big meal in Chinatown, would – one at a time – walk out of the restaurant. He shared this story proudly, telling me that he was the last one to walk out, leaving the unpaid bill still on the table. Even many years later, he was proud to have been the lead criminal.

Perhaps in an ironic expression of rebellion, in contrast, I am fiercely honest – often to a fault. He is in large part to thank for my personal commitment to honesty. I also credit my leadership instincts to his influence. He too was a self-starter, an entrepreneur, a color-outside-the-liner. Like me, he had little interest in meaningless small talk, and he rarely gave much credence to the opinions of others.

Despite behaviors that seemed to express a blatant lack of sensitivity, I believe his many layers of armor served to protect the sensitive heart that lay buried underneath. Like so many of the people I know and tend to in my life and in my work, I know my sensitive soul requires ongoing intentional energy management in order to maintain an open heart. Haphazardly, I gained this wisdom from him.

In a deep way, I am forever committed to a much different ethic than “do as I say, not as I do”. The alignment and integrity of practicing what I preach is incredibly important to me. I am not here to tell you, or anyone, to do as I say. Quite the opposite; I don’t always succeed, but I always strive to walk my talk.

One more story. It’s one I’m particularly proud of, and one that I believe holds a powerful lesson for us all.

When I was 13 or 14 years old, I witnessed my dad demonstrate extraordinary self-discipline and extraordinary commitment. At 50 years old, he decided to train for and run a marathon. I remember he mailed in his registration for the race – the Marine Corp Marathon in Washington, DC – even though, starting out, he couldn’t run a quarter of a mile.

Now registered for a marathon (26.2 miles!), he got up, six days a week, and went running at 5 a.m. with the discipline of a soldier.

In typical teenage fashion, I stayed up late and had a reputation for sleeping as late as possible and couldn’t imagine getting up at 5am for anything — let alone to go running.

So I asked him, how in the world, he managed to do that, every. day.

Here’s what he said. I’ll never forget it.

He said, “Do you think I wake up each morning before the sun is up, and then weigh whether or not I feel like going running?? No way!” He went on to say: “If I did that, I’d never go. When I wake up in the morning, I just get up and do it, because the decision was already made.”

“The decision was already made…”

Something hard to describe happened for me in that moment.

I remember those words like it was yesterday, echoing in my mind, lingering in my heart.

“The decision was already made…”

What I know to be true – and what I’ve essentially built my life and career on – is that achieving a dream or goal, or any seemingly out of reach accomplishment, requires doing what my dad did – making the decision, once, and then doing what needs to be done.

Part of his decision included not allowing the past, or present, to determine his future. My dad knew that his past was only as relevant as he allowed it to be.

He decided to run a marathon, despite the fact that he could not yet run a-quarter-of-a-mile. He was 50 years old. His past included drug addiction. He didn’t have any marathon runner friends, if any friends at all. He was told by others that he’d fail, that he was too old, too out of shape, that he’d never be able to do it, that it would cause more harm than good, that his goal was too big, that he’d hurt himself.

Yet, despite all that, he did it.

He ran a marathon. I was there when he crossed the finish line – and then threw up.

As I reflect on his life, I truly believe that was his happiest, proudest moment.

And he was able to do it because …

3.) He didn’t give in to the reasoning of naysayers, however well intentioned.

4.) He got up, each morning, tied up his sneakers, all with the clarity and focus that the decision was already made.

So much of my dad’s life, and story, and our shared story – is profoundly sad.

When a sad story ends it is bittersweet indeed. 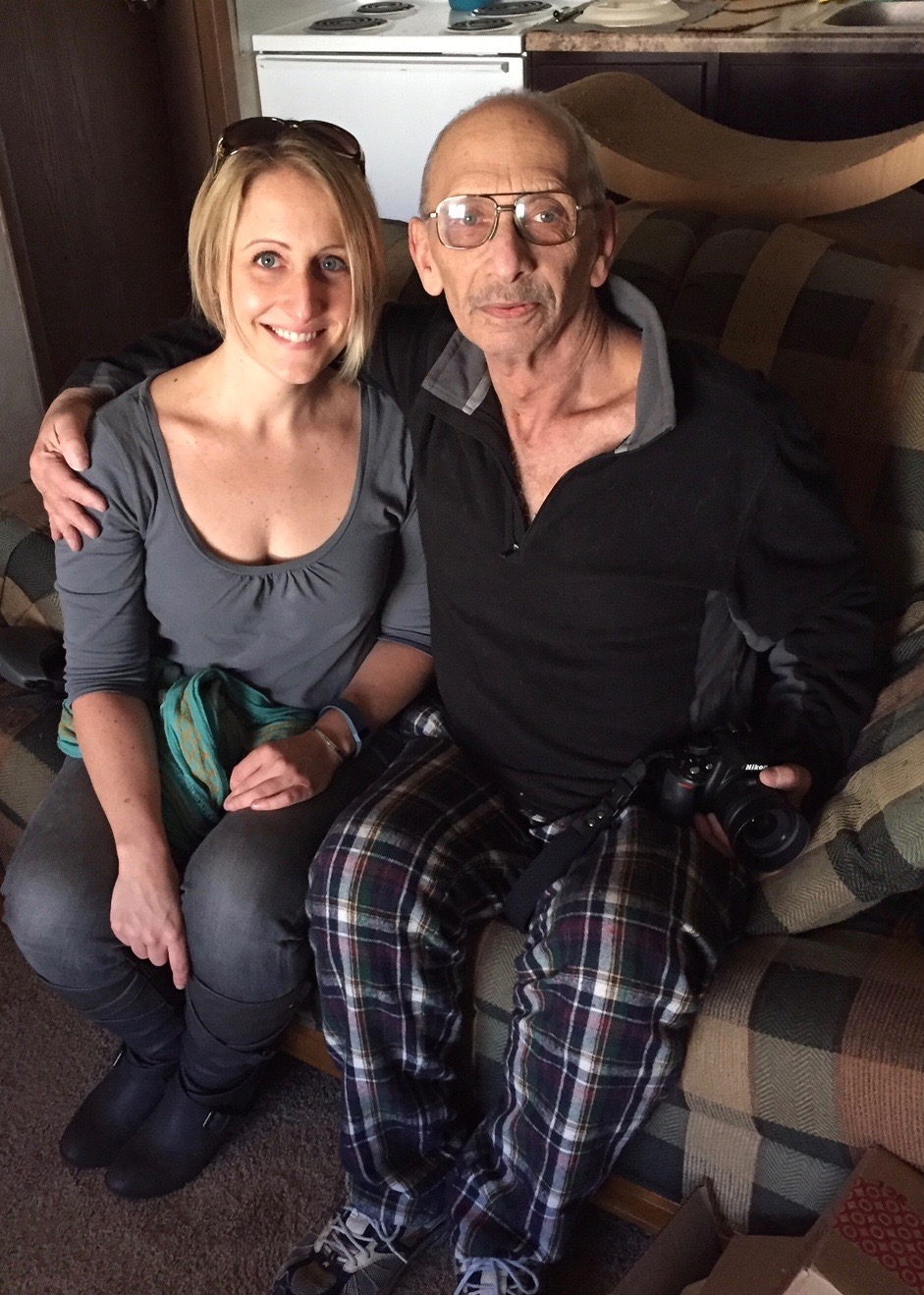 Despite you having come from a place where even the playgrounds were cement, I am happy to share your love of the woods. I cherish the old photos of little me in a pack on your back while you hiked, walking stick in hand.

[The picture seen here was taken February 20, 2016, the last time I saw him, the first time after many years. Look closely and you can see he was still wearing a pair of those New Balance sneakers, 20+ years later.]

While the last 20 or so years, our contact has been inconsistent, at best – with gaps that spanned many years – I never stopped loving you. In my heart of hearts, I believe you know/knew this, and that you love me too.

However unintentionally, thank you for the ultimate lesson: that love is utterly indisposable.

Thank you, for modeling discipline, providing me with numerous opportunities to discern when it’s helpful and when it isn’t.  And thank you for the immense beauty that comes with forgiveness.

Godspeed, Dad.  I know you did your best. We are all doing our best. May you rest in peace.

Written by: Tara Sage, curator of Sheulogy.com + founder of TaraSageCoaching.com